To get a better experience, try one of the supported browsers listed here. 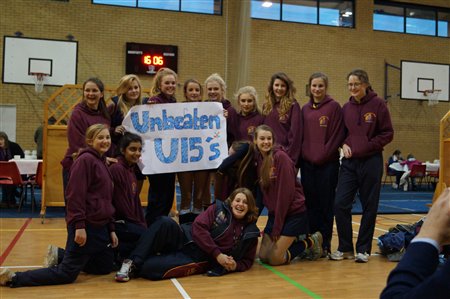 The U15 season has been phenomenal by anyone’s standards. A group of talented and tenacious players who have trained and played hard and relentlessly have ended with an unbeaten season in regular fixtures.

The season started with PGS: our local rivals are always tough competition but we saw a 1-0 victory which was not necessarily reflective of the amount of chances we had, and paved the way ahead. Defeat of the 2nd XI followed, and Pangbourne College saw an impressive 5-0 victory. The HCS match saw the girls getting a little too confident, and their laid back approach caused them to be 1-0 down at the half time whistle. However a now legendary half time talk from Mr Peel sorted their heads out and they came back as 3-1 victors. Bryanston, King’s Winchester, Churcher’s and Seaford suffered similar fates. Only Canford and Dauntsey’s came close to ending the unbeaten run, but in both games we hung on to the bitter end, securing draws in both. The match of the season was the win against St. George’s College, where the determination and skill of the team was outstanding.

We took the squad to the South of England invitational tournament at Surbiton Hockey Club to see how they would fare further afield. Adeptly making their way to the final having faced Schools from Bucks, London and Surrey, (and without really playing their best hockey) they took on Eastbourne College in the final. Described by the organisers as the best game of the tournament, the final was fast-paced and exciting with both teams having opportunities to score. In the last 5 minutes we conceded the only goal of the game and were unable to reply in the given time. The U15 team have had an incredible season and they deserve to be named the runners-up of the South of England Schools.

They have played some beautiful hockey and have been totally committed to their game and to the team. It is so exciting to think that we have such strength in the Upper School to come through to Senior Level next year, not just in terms of their skill on the pitch, but because of their unstinting desire to improve and to compete. They have responded brilliantly to Mr Peel’s coaching. They truly are one team, not merely a group of individuals with a common goal. Player’s player: . Most improved player: Maddie Kinder. for the best season I have had in School hockey. U15s. Unbeaten.